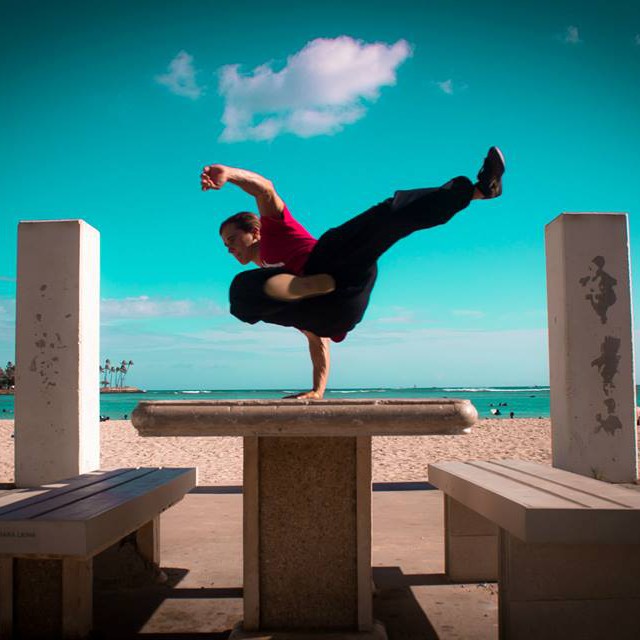 Hawaii Parkour is an educational fitness organization, dedicated to sharing the healthy movement and risk-assement strategies that Parkour training can provide.

Instructor Ohana, Past and Present

From the time of our organizing in 2007 by Ozzi Quinterro, Richard Skowronski, Adam McClellan, Jason Triplett, David Saucedo Eilchman and J.C. Watson, Hawaii Parkour has been a community of playful exploration and self-improvement. Over the years some of us have moved away from the islands and on to new adventures, but the heart of our Hawaii Parkour vision remains the same: to spread awareness about the uplifting and freeing art of Parkour, and the natural movement philosophies and human-environment connection that lie behind the training.

Alana Reis- Current Lead Instructor, Oahu
Alana was one of the first Hawaii Parkour students and has been hooked ever since. She loves the freedom of creativity, the grace of flow and the challenges both mental and physical that parkour presents. She’s always eager to share in those experiences with fellow practitioners and newcomers as well. Alana received her instructor certification in March 2015 at the Parkour Generations A.D.A.P.T. in Seoul, South Korea. As of 2018 Alana is our main Instructor on Oʻahu and focuses her energy towards promoting community jams and events, as well as personalized classes.
* Training Parkour since 2009
* 7+ years of Parkour coaching experience.
* A.D.A.P.T Level I Qualified (Art Du Duplacement and Parkour Teachings) 2015
* Passionate about teaching women, queer youth and older particpants

Richard Skowronski – Co-Founder
Richard has been playing in his environment for as long as he can remember, along with a movement history of highschool wrestling. At a community College in Ohio he was introduced to Parkour via a friend. In late 2007 he moved out to Hawaii where he met and began training with a group of amazing individuals; Ozzi Quinterro, Adam McClellan, Jason Triplett and a few others. Together they formed Hawaii Parkour and began to bring awareness of the art to the island. As an instructor, his main focus is on the conditioning aspect of training, both mental and physical; being strong to be useful in whatever situation that is placed in front of us.  Movement is there to inspire and motivate us to embrace the challenges and opportunities presented to us in our day to day lives. As a close friend once said, “live free, run free and never stop moving.”
Richard currently lives in Colorado with his young family, but hopes to visit Hawaii regularly in the future.
* Training Parkour – Freerunning since 2007
* 10+ years of Parkour coaching experience.
* A.D.A.P.T Level I (Art Du Duplacement and Parkour Teachings) 2011
* A.D.A.P.T Level II (Art Du Duplacement and Parkour Teachings) 2018
* APK  (American Parkour)Level II Instructor Certified
@movementisfreedom

Eli Litzelman
Eli was born in the small town of Jackson, Wyoming and didn’t encounter parkour until the age of 16 while watching a video on YouTube. His mom promptly found him running along the top of the roof. She may have been none too happy about this development, but he was inspired and encouraged to explore the plentiful woods and forests in the area. In 2010, he moved to New Zealand and came in contact with the New Zealand Parkour Association and has been training diligently ever since. He still stays in contact with many founders and practitioners there today. In 2012, his travels brought him to Australia where he began training with practitioners of the Australian and South Australian Parkour Association in developing a movement center known as Point A. Eli moved to Oahu in 2013 as a student at UH Manoa and quickly became involved with local parkour classes. He’s now living in Ohio with his young family. 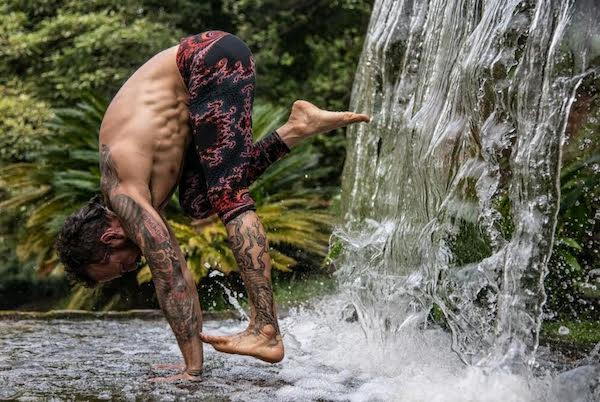 Ozzi “Hijo del Sol” Quintero (Maha Kala Das)
Heʻs travelled far since leaving Hawaii in 2013 but heʻs still a well known founder of our organization. He was best known for his mental and physical challenges that he posed to his students, allowing them to push through mental barriers to discover a strength within, part of a tradition of training among some of the founders of LʻArt du Deplacement.

Through my years of movement; from martial arts, to breakdance, acrobatics, parkour and many other disciplines I have found my way to personal and spiritual development. It has become my mission and service to the collective community to spread and share this knowledge with the intension to bring awareness to the inner changes necessary to find peace, harmony and balance within which will manifest in how we are part of the transformation, without.
“As within so without”..  As you develop physical strength, balance, body awareness and control, so do those qualities manifest in your inner, balance, strength, and awareness finding yourself enjoying of a more holistic way of life.

Over 20 years of movement practice and investigating experience – physical and mental development.
Movement training since 2000
Acroyoga training since 2009
CF Level I certified
Parkour ADAPT level I & II Certified
Yoga Instructor Certified
Currently continuing to investigate movement and meditation as a way of connecting to the deeper and more meaningful essence of our true existence.

Based in Bogota, Colombia

David Saucedo Eilchman
David is a friendly person who enjoys many kinds of dynamic movement. His main background is martial arts, being most passionate about Kung Fu. While living in Mexico David practiced the acrobatic side of parkour, emphasizing flips. It wasn’t until he moved to Texas and joined Texas Parkour that he learned more about the importance of basics and delved into the philosophy of parkour. After being a part of TXPK for two years, David moved to Hawaii where he trained with the founders of Hawaii Parkour. He was invited to join the core team and is now helping parkour grow on the islands by sharing the essence of this amazing way of life which has brought so much growth into his own.He regularly trains with his wife Angela and they use their diverse skills to put on inspirational shows through the performance arts association they have founded called Davangie. He now lives in Texas with his young family.

“Nothing is more revealing than movement”
@davangie 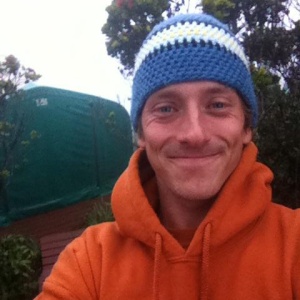 John-Carl Watson
At home in the water as much as he is at home on the land, John-Carl takes parkour with more of an amphibious approach. Born in Michigan and raised in Honolulu, he has always lived an active life.  He grew up surfing, hiking and playing sports. He has always looked for new ways to challenge his mental and physical boundaries.
Aside from being a traceur, he works in conservation and often goes into the forest and works to save Hawaii’s unique ecosystems. The concept of Leave No Trace Parkour plays directly into how JC thinks a successful training symbiosis should be.
“Parkour is so much more than just jumping off of things. There is this huge mental aspect, which is just as much a part of the discipline as is the physical side. You are capable of things far beyond what your mind believes you can and cannot do.”

Jason Triplett
Guam Parkour Founder
Inspired by all the positivity that parkour brought to Hawaii’s community, Jason eventually traveled back home and formed a community for Guam, known as the “Guam Parkour Association” (GUPK).  Learning under the leadership of Ozzi Quintero, founder of Hawaii Parkour, Jason continues the UCC mission by providing a positive venue for this art in Guam’s community.

~ GUPK promotes “safety, positivity and respect” in the practice of parkour.
Jason quotes,” Guam’s Political Leaders DO NOT put any focus in community and youth development. I left Guam and came back 8 years later, to find that the issues with our youth still exist: vandalism, drugs, gangs, obesity, under age drinking, smoking and pregnancy, etc…I believe that proper parenting is trickling away and there is a lack of positive inspiration these days…If we have the strength to change our community, we must do our part to keep a balance for every generation hereafter.”

Jason volunteers most of his efforts in to building GUPK with a goal to develop a positive community with Guam’s youth, nonetheless, to give the youth a different outlet…He states:
“Parkour is just like a martial art, but more so about developing our innate ability to move without restriction. There is no right or wrong way to move and that is what parkour emphasizes on…developing “self” or reinventing ourselves through movement, just like a traditional martial science. Parkour is a positive force for any person who properly adopts the art’s philosophy and this is what GUPK hopes to provide for our youth ~ development in their “self”.”

“It’s a lot of work running a community, especially without funding, but I’m blessed with the talent to invent ways to build this community and somehow keep it going in the best direction.  Right now, GUPK has accomplished much in its early stages of growth, but this is only the beginning,” says Jason.
Guampk.com
* Training parkour/freerunning since 2008
* 15+ years various martial arts: tae kwon do, kickboxing, wing chun, tai chi, boxing…
*  2+ years stunt training/fight choreography
*  2+ years ballet
*  1+ years swim instructor
Contact:
guamparkour@gmail.com
Facebook
Facebook PK Group

Lehigh Valley Parkour Founder
Adam started off in the arts of movement when he joined his first Karate class at the age of 9. Adam trained in the Martial Arts daily and it became is passion. To pursue his love for the Martial Arts, Adam expanded into learning other styles of Martial Arts, including Internal Kung Fu, Tai Chi, and Qigong. Adam eventually achieved the rank of “Sensei” in Kyokushin Karate, and “Shifu” in Chia Chun Tao Kung Fu. During his Martial Arts training, he began to experiment in the art of Parkour.
After a year of training on his own, Adam moved to Hawaii, where he met Ozzi and assisted in the rise of the Hawaii Parkour community. After spending a year training with Ozzi and assisting him in teaching classes, running seminars, and consistently providing learning resources for the online community, including tutorials and conditioning videos, Adam returned to the Lehigh Valley.
In June of 2009, Adam founded the Lehigh Valley Parkour community. Joined by Andy Keller, Adam has since started weekly classes at the nationally acclaimed Parkettes Gymnastics Center in Allentown, and continues to teach Seminars all throughout the year.
LehighValleyParkour.Com
* Training parkour/freerunning since 2007
* A.D.A.P.T Level II certified (Art Du Duplacement and Parkour Teachings)
Contact:
Adam@lehighvalleyparkour.com
Facebook.com/AdamMcC